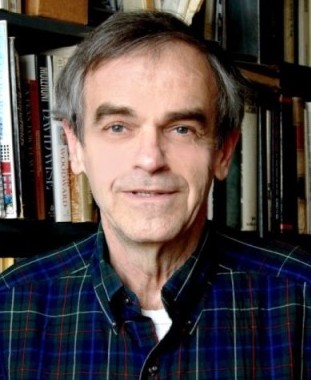 With the help of their parents, John, along with his sister Mary Beth and their friend Christopher Eckhardt brought a suit against the Des Moines, Iowa, Public School District, for having violated their First Amendment Rights to freedom of speech. This lawsuit resulted in the landmark 1969 United States Supreme Court decision "Tinker v. Des Moines".

John was born in 1950, and grew up in Iowa. One of 6 children, his father was a Methodist minister, who lost his job preaching in a small town in Iowa because he stood up for the rights of the black children in that town to use the public swimming pool. The family was relocated to Des Moines, and their father, the Reverend Leonard E. Tinker, Jr., became the minister of a church in that city. He soon became involved in the civil rights movement activities which were taking place in Des Moines, and his new church did not renew his contract. John and his siblings lived through these rough times in the family, and he like the others, participated in civil rights protests and memorial gatherings during the 1960s.

Toward the end of 1965 there was a march against the war to be held in Washington, DC. In his new employment as "Peace Education Secretary" for the American Friends Service Committee (AFSC), John's father had helped to organize peace groups in Iowa to attend this march against the war, and John was given permission to go with the group on chartered buses to the event. After the huge march, on the return trip back to Iowa, there was a discussion on the bus regarding how they might continue to raise awareness of the war. It was decided to wear black armbands, to mourn the dead. John and several of his friends took this idea back to their church youth group for discussion, and many in the group wanted also to wear the armbands. But when the school authorities learned of their plans to wear the armbands, the wearing of the armbands was forbidden.

John, his sister Mary Beth, their friend Christopher Eckhardt and several other students decided to wear the armbands anyway, and they were sent home from school. After discussing the matter with a lawyer from the Iowa Civil Liberties Union, the Tinker family and the Eckhardt family decided to sue the School District for having violated the First Amendment Rights of the students. The 1969 decision written by Justice Abe Fortas famously stated: "It can hardly be argued that either students or teachers shed their constitutional rights to freedom of speech or expression at the school house gate..."

After graduating high school in 1968 John attended the University of Iowa in Iowa City. However, the war in Vietnam was increasingly occupying the national attention full time, and campuses around the country, were in turmoil over the war, including the University of Iowa, and John was involved with those protests. He dropped out of the university for a semester, then returned, but decided to again drop out of school, and to not pursue an academic career. Rather, John decided to study on his own, and that is what he did. He studied electronics and gained a First Class Radio Telephone Operators license, which was the credential one needed to operate a commercial radio station in the 1980's, and John became the Chief Engineer at the KCJJ AM radio station in Iowa City. At the same time, John opened a small store, "Inventors Supply", where he offered salvaged electronic equipment for sale. During this period in his life, john also learned to program microprocessors, and as home computers became available he entered the software market, having written a statistical quality control program that ran in several factories in the Detroit area. He wrote other industrial programs and the State of Iowa's database of industrial byproducts.

Collecting materials to be distributed in Nicaragua, John organized "Peace Parts" and transported many tons of bicycles, sewing machines, medical equipment, dairy equipment, shoes and other things to Managua, Nicaragua, and traveled down there several times each year for four years, making connections, and coordinating solidarity activities between groups in Iowa, and people working in Nicaragua.

On returning to the United States, John was offered work in the telecommunications industry doing database programming for large billing systems, and later became involved in the design of system architecture.

In 1995, John bought a retired public school building in Fayette, Missouri. He constructed the low-power community radio station, KPIP, which he operates with his wife, Patricia. John frequently telecommutes into classrooms around the country to discuss student rights and Tinker v. Des Moines.